It's the most wonderful time of the year...again! 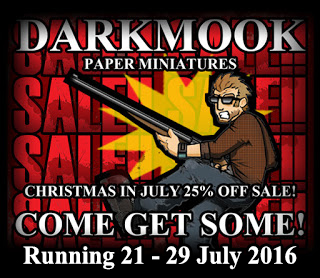 DARKMOOK PAPER MINIATURES are taking part in the RPGNow Christmas in July sale! The sale starts 21st July 2016 and ends 29th July 2016 (10am EST) so pay a visit and make all your Christmas wishes come true that little bit early!
COME GET SOME!
Posted by Adam Steel at 07:26 No comments:

THE VAMPYRE OF MONS

The Vampyre of Mons is co-operative game of exploration, adventure and horror by Darkmook Paper Miniatures & Water Closet Press. Debuts at Thought Bubble 2015 in the UK and originally limited to only 30 copies for the initial print run, this is now available digitally as an RPGNow! exclusive! 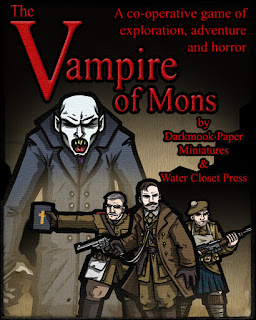 Set in the dark days of the Great War, The Vampyre of Mons is for 1-6 players and sees heroic (and not so heroic!) British troops and their mysterious allies facing the horrors of the Vampyre Lord's castle, where the very building itself plots to aid in their demise!
Using the latest version of the Darkmook Paper Miniatures Survival Horror rules, all you need to do is print and construct the components, grab some 6 sided dice and a standard deck of playing cards and you are ready to start your adventure! Purchase at RPGNow! 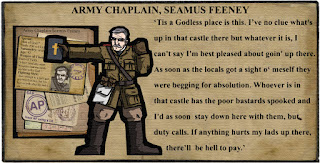 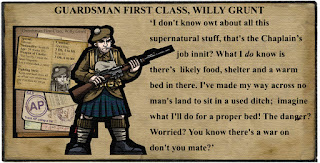 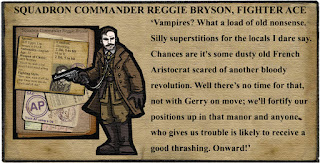 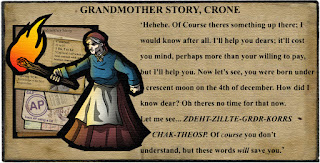 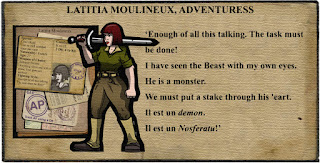 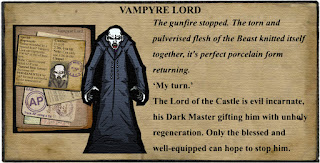 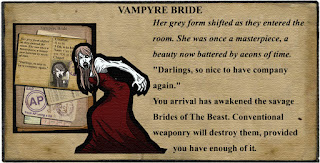 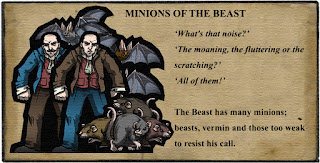 The Castle at Mons
The castle is constantly shifting and changing, which is reflected by the Vampyre player adding used room tiles back into the tile deck and shuffling them at the end of each round. For those trapped in the castle, retreat is impossible! 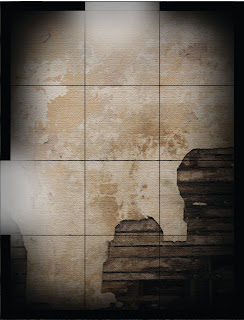 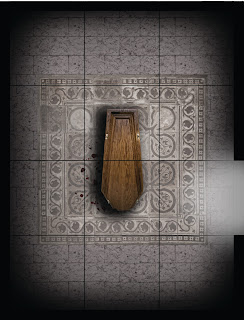 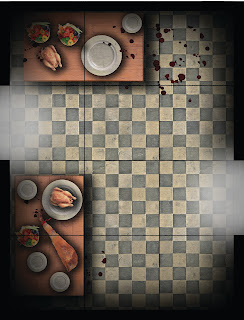 ‘Wasn’t the library this way?’
‘Nonsense private, it’s over here. At least, it was when I last checked...’
The Castle at Mons is a dark and forsaken place. It shifts and warps, trapping those on whom it’s master would feed.

Playing cards
Playing cards are used to discover what awaits the players in any given room; a supernatural relic, armour and health, deadly environments or vicious foes-it's all in the cards!

Eldritch Mist
The shot rang in the chamber, held by the demonic smog. Unseen, something shifted closer to them.
A thick mist pours from the walls and rises from the floor, obscuring the horrors of the castle.

The Crucifix
The priest turned the crucifix over in his hands with a boyish grin as the Beast drew near.
‘Ask and ye shall receive.’
The castle is littered with the remains of past visitors; notebooks, rations and the Weapon of God. With these, and these alone, can the Beast finally be put to rest.

Fear and Death
Fear plays an important part in The Vampyre of Mons; failing a fear test at the wrong moment can spell your doom, and perhaps that of your comrades!

The private froze. His body was stone. He became aware of the blood in his veins. So did the Beast.
Even the bravest soldier can be powerless before true evil, becoming little more than another shivering, defenceless victims.

However, inside the castle, death is not always the end...

‘Come on Willy, don’t die on me.’
The colour drained from Willy’s face and his pupils became predatory pinpoints.
‘Oh, I’m not dead. Not yet.’
The Beast is master of all in his castle. Even a body, once it’s soul has departed, becomes his property.
Posted by Adam Steel at 00:51 No comments: